One of these days I'm going to buy a tripod so I can post a non-blurry photograph. My hands just keep getting worse and worse. Seriously. This was the best I could find out of what was easily two dozen photographs. Eventually you just have to give in to the inevitable and spend the money. Hahaha!


Anyway, second bird is officially finished. It took waaaaaaaay too long. I've been so exhausted with work lately that even cross stitch seems like it is just too much to ask. The dark fabric did not help. Maybe since my next project is on a lighter fabric, I'll work on it a bit more regularly. 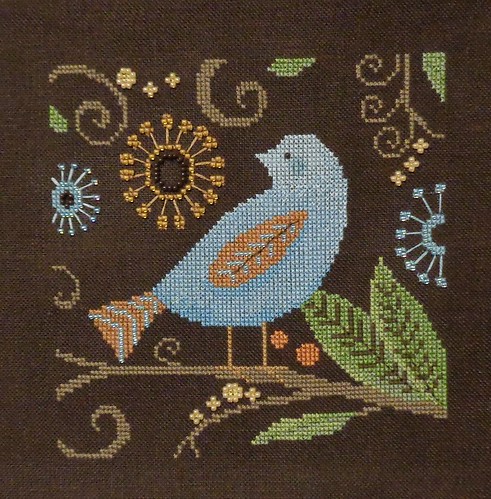 You ever get on one of those jags where it seems like every book you pick up is just...Ugh?

And I find myself more annoyed than usual because the books in question are from such-and-such best seller list and/or so-and-so's book club list and so you'd think, "Hey, this should be a pretty decent read. Or, at the very least, mildly entertaining. Surely most of the country and/or this vaguely bookish celebrity wouldn't put their name behind complete and utter crap."

Only, you'd quickly discover just how wrong you are as you cannot help but notice that the story or the protagonist or the villain or, perhaps even more often, the story AND the protagonist AND the villain are all just so very stupid (like, how do you tie your own shoes? stupid) or cliche or unrealistic (or dumb AND cliche AND unrealistic), that suddenly, you find yourself wanting to rip your own hair out rather than read even one sentence more.

So yeah. I'm on one of those streaks. I've actually managed to accidentally select two separate novels where the "perfect" woman with the "perfect" husband and the "perfect" life is actually being abused (in often painfully unrealistic and clearly un-researched ways--I mean, is it really so much to ask that you at least familiarize yourself with how domestic abuse usually plays out--how victims find themselves entrapped--because, newsflash would be novelists who just happen to be reading this post, it usually isn't like a switch being flipped on the wedding night from kind, loving partner to sadistic control freak who only wants to hurt). *insert eye roll*

And if all that weren't enough, the third novel I started today, only to end up putting back down in disgust, involved a couple that barely had two working brain cells between themselves, who suddenly happened upon a cool 2 million in cash and prizes in the middle of the ocean with no other witnesses present, but who then proceed to muck it all up in the dumbest ways possible. Like seriously. They could have walked away with 2 million, no strings attached. Easily--if they'd just had half a brain.

I put it down when I realized I was actually rooting for the "bad" guys and hoping that they'd kill these two idiots and put us all out of our misery. At least then, you could argue the story had something of a moral: Don't be a dumb ass.


*sighs* If I sound frustrated, it's only BECAUSE I AM. I feel like it has been entirely too long since I actually read something good. I almost expect this when I'm trolling through fanfiction.net or AO3. There, you're more likely than not to find something someone literally typed up that very same afternoon (guilty!) or to find someone with the vocabulary of a poorly read 16 year old (because they're actually only 12).

But the people writing these published novels are (supposed to be) backed by editors and proofreaders who can tell them the hard truths about how a good idea does not necessarily a good story make without hours and hours and hours of hard work editing and refining and improving, etc.

And while there's still a chance that some of these stories might have gotten there at some point... They weren't there yet.


Not by a long shot.


And I think that that may be my biggest frustration of all--opportunity squandered.
*sighs*

I am really late to the Discworld Series. Like 30 years late. I can remember people being excited about them back in the early 90's and I've been meaning to read them since then.


I had actually kind of forgotten all about them until a coworker recommended the novel Good Omens (her words: slightly, okay very, sacrilegious--right up your alley) which was co-written by the Discworld author, Terry Pratchett, and Neal Gaiman. I thoroughly enjoyed Good Omens, more than even some of the novels I had read solely written by Neal Gaiman, and that reignited my want to actually read some, if not all of Terry Pratchett's Discworld books.

But where does one begin in such a gigantic, interwoven, complex world? Ask the internets. And when I googled, "Where to start Discworld," the internets said, "Going Postal." So I did.

And I have thoroughly enjoyed it.


Especially this passage, which, you must bear in mind, was found in the 33rd book of a series written, this case, in 2004, by a British author who, sadly, passed away in 2015:

As an American reader in 2019, it warmed my heart to know that, at least in regards to some things, we're all equally idiotic.

And for the record, Pratchett, or rather this physician in Pratchett's novel, really did divulge the best way of dealing with nurses:

The man was correct, one shouldn't argue with white-clad women who pronounce "what" (as in "Hwhat are you doing in here?") with two H's. *grins*

Sometimes life imitates art. I am a crooked little woman. And I live in a very, very crooked house. Nothing is plumb, nothing is level. I doubt there is one, single, 45 degree angle in this entire place (and if there is, it most certainly is where a 45 degree angle shouldn't be).


Even the switch plates and outlet covers are crooked.


Whoever put this house together clearly did it by eye. And their eyes were not set straight in their head.


It fits my crooked personality to a T (ironically enough).


And, normally, its not even that noticeable to the lay person. That is to say, when everything is crooked, nothing is.


Or so I should remember.


I think the irony might be driving me mad.

I'm just going to say it. Some times I really relate to Jyou: 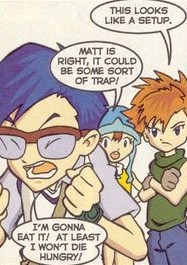 The idea for this was actually a text .gif sent to me by mistake. Hahaha! Inspiration from the oddest places.

You may recognize the quote if you are a fan of a show called The Office (American version). It's a present for a co-worker who will be moving shortly. *grins* 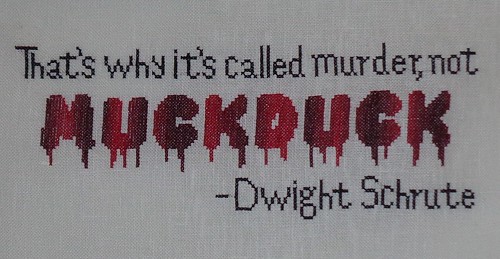 Snuck one in between birds. This is for a (soon to be ex-)coworker. Sometimes you just see a pattern and think, I need to stitch that for X person.


In fact, if you don't feel that, I would't recommend even trying.


But when you do, things knock out really fast. *grins* 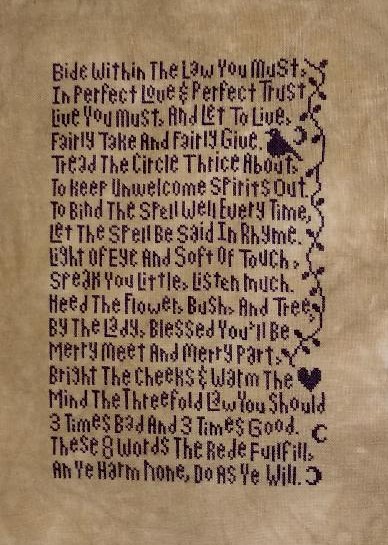 I know I say this every time, but for the love of god Mill Hill, sort your ever-lovin' threads! Or, if you can't be bothered to do that much, at least give me something else to go on like, say, the number of strands you've included of each color. Anything to keep me from having to spend crazy amounts of time under a full spectrum lamp trying to decipher light from medium from dark.


So anyway, this is a Debbie Mumm design. Frankly, I've not seen much Debbie Mumm that I really liked. Not my style. But when I saw the four birds in the "Out on a Limb" series, somehow I just knew I would have to stitch them.


I've switched out the 16 count chocolate aida included with the kit for some 32 count chocolate linen. I really don't like the look of aida. But otherwise, it is stitched as charted. 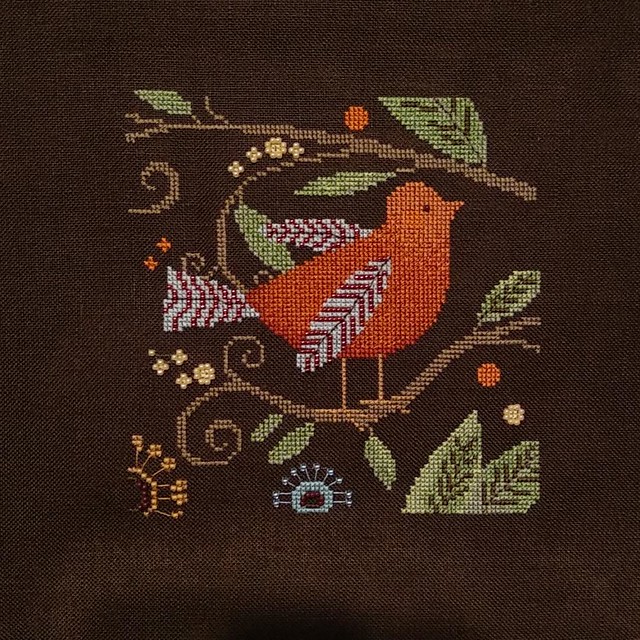 I'm stitching each bird individually on their own piece of linen but intend to have them all framed together.

A quick little start to the year. I had an extra leg up on the stitching thanks to a Doctor Who marathon all day long New Year's day. *grins*

It's a French pattern titled Joli Bouquet. I love doing patterns from other countries. I mean sure, floss numbers require no translation. But it still makes me feel multilingual. Hahaha! 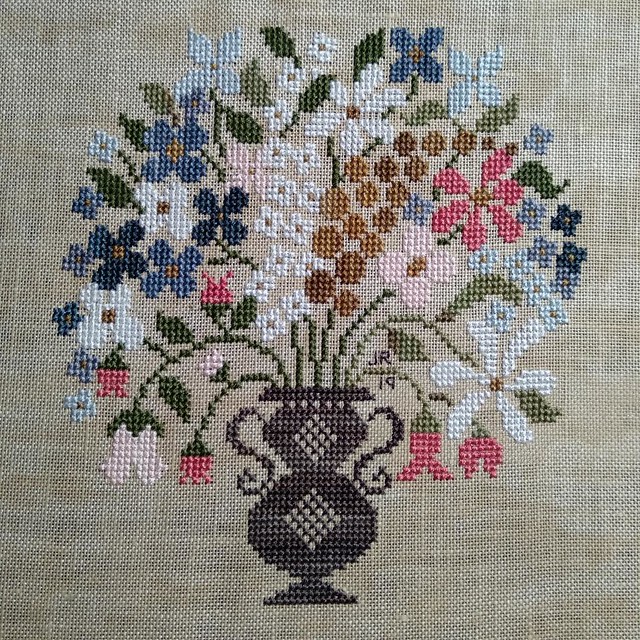 Next I'm going to do Mill Hill's little series of 4 birds designed by Debbie Mumm. I'm not usually that big a fan of Debbie Mumm designs but these little guys just spoke to me.

Oh, who are we kidding... we all know it's the beads. Any excuse to use some beads. Ha!


Speaking of beads. I have come to a decision. I've wanted to stitch the Alpine Garden Mandala by Chatelaine designs for years now. But man-oh-man, those silks, those crystals, that linen! I'm not made of gold. But this will be my celebration gift if things clear up at the hospital. I'm going back to 40 hours starting next week (they had us cut to 32) and if that lasts and (bigger if) we get news that someone is actually interested in buying us out and we won't be shutting down after all, then I will buy my Chatelaine.

That's a promise I make to me. *grins*

Last finish of 2018! A freebie from Ink Circles: 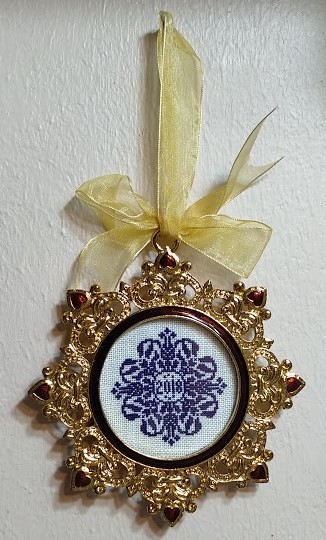 Stitched one over one on 32 count linen. I used the same overdyed silk as I used in my big Ink Circles "Cirque des Carreaux". You may notice I left part of the design off so that i could use a round ornament I bought years and years a go and look at every year and think... surely there is something I could stitch for that. Hahaha! Finally!


Now to spend the rest of the day picking out and kitting up my first project for 2019. Preferably something in large print as my eyes are crossing after stitching this. *grins*
Collapse