So I'm watching the final episode of the final season of Mad Men.

I can admit to only ever having watched about half of the first season, but this is one of those shows that enough people watch, and, more importantly, talk about, that I still had somewhat of an idea of who was who and what was going on.


Not a bad show, overall.


I'll admit, the idea that Don finding himself at a new age commune is what will bring about the most iconic Coca-Cola commercial of all time brought a bit of a smile to my face.

But the part that "got" me more than any other was when, as I lay half drowsing on the guest-room bed, the fellow commune-ee who would ultimately be the one responsible for Don's breakthrough began talking and I knew, almost instantly, that this character was being portrayed by the same actor who played the homicidal bell hop from Clyde Bruckman's Final Repose (X-Files, season 3).


Opening my eyes to actually look at the character only served to drive home that 20 years have passed since CBFR originally aired. Some gentle passerby (or FBI agent) might have thought I found our impromptu reunion amusing, but, in the words of Clyde Bruckman, himself, "I'm not smiling, I'm wincing."


Twenty years. Twenty years and still, I can name the season, episode and character played by a one-time guest actor after hearing him speak but a handful of words.


And that was when I knew...it's a done deal. I am an X-Phile for life. Nothing, short of my own death, will ever remove X-Files from my soul.


And truthfully, not even death may be enough.

Just as I find myself getting back in touch with my X-Phile roots, we get our first TV Guide cover in FOREVER: 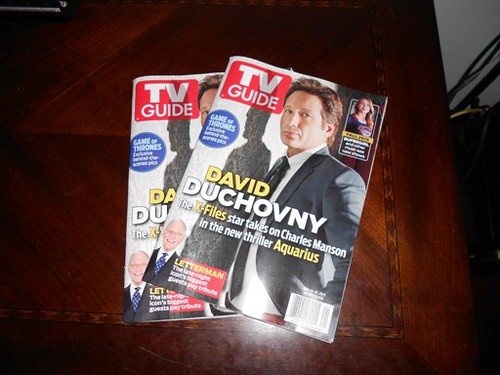 I won't comment on how old he is starting to look. Nor will I comment on his new eye, mouth and forehead wrinkles. I just won't.

Okay, so maybe it's for his new show and not the X-Files. But still, the piece mentions the X-Files and there is even a picture of David and Gillian as Mulder and Scully with it. So that's something, right?