Okay, newest chapter of Dengeki Daisy actually had me tearing up a bit. And that's saying something. I love sad stories (or sad parts to stories), but I'm not a teary person. To date, this is story no. 3 that has genuinely moved me to tears. First was the final novel in the Ann of Green Gables run, Rilla of Ingleside, when her brother Walter dies in WWI. Every time I re-read that, I cry. Second story is actually also a manga, this time a one-shot yaoi called Hybrid Child. If you like yaoi at all, this one should be part of your collection. A wonderful story, through and through.

And now, I add to the short (but apparently growing) list: Dengeki Daisy. The relationship between Souichirou (Teru's older brother) and Kurosaki (Daisy) is, by far, the best in the entire story. Heartbreaking. Sweet. And utterly, utterly tragic. I love it. *grins* 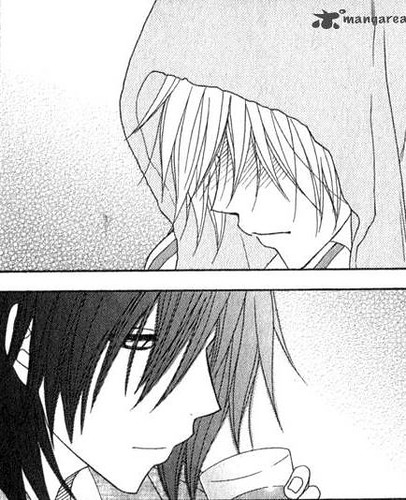 Again, I'll say it: Good read. Silly and light hearted in the first seven manga, heart crushing in the eighth. I cannot wait to see where it will go from here.

Well, I just called the cops on my neighbors for the first time ever. I'm not generally in favor of narc-ing on the people you have to live around, but this time, I feel, they left me no choice.

For those of you not tuning in to Texas news, we are all about to die fiery, fiery deaths. My personal belief is that this is gods way of telling Rick Perry that he thinks he's an Ass. After all, god is omnipotent, no? My little town is currently under "get ready, we're probably going to make you evacuate" watch. Honestly, they'd probably already have us gone except for one, itty-bitty issue. Interstate 45, pretty much the only way into and out of here has currently been shut down both on the north side of town and on the south side of town due to out of control wildfires. That is to say... they don't really know how to evacuate us. Yeah.

So anyway, not one to really get up in arms over things, I calmly packed my car with a few things I'd hate to lose (I've never appreciated external hard drives as much as I do today), a clean litter box, litter and cat supplies, moved the fish to an easy to grab tank and set up the little plastic tote I use when cleaning up the guinea pigs' cage so that I could grab them and run if the order came or I saw flames licking across the long-since-dead lawn. Once I did that, I realized that the pigers could really do with a clean cage, so I put them in their tote, drug the big cage outside and cleaned in the cooler than usual, if decidedly more hazy air, counting fire vehicles as they roared by, sirens screaming.


So imagine my surprise, when after finishing this, I go into the kitchen for a glass of ice water and what should I see the neighbors behind me doing? Why, they've scraped out a fire pit in their back yard and are roasting weenies. Now I get it. Family time is important. Especially when you might all die fiery deaths in your beds that very night. But is a campfire weenie roast really what you think to do when you know (can smell) that the entire state has become little more than kindling in fate's great barbeque? Really?

*sighs* So I reported the bastards.