Re-watching the 02 episodes from around about the time the Kaiser really starts to go off the deep end until about the time that Daisuke finally succeeds in convincing Ken to join the team (or I finally fall asleep) in the hopes that a little plot bunny that I've been working on for at least 7 years now finally finishes working its way up to the surface. Maybe. :P


But I'm not writing to hint-tease about the possible, eventual birth of a piece of fanfiction from a series no one watches anymore or probably even remembers. But rather to say, put simply:

E-Gods! I do love Digimon!

Even just watching the opening credits (I've been thoroughly enjoying the Japanese version on hulu.com) is enough to get me grinning.


And I don't care what anyone else has to say on the matter: Daisuke really is one of my all-time favorite characters. Yeah, he's a bit of a doofus. But he's a genuinely kind and caring one.


And, even knowing what I know, it never fails to amaze me just how cruel the bearers of Light and Hope can be. I mean really! I actually find myself genuinely disliking Hikari more often than not. And that's saying something. I usually don't waste the effort necessary to dislike fictional characters. *grins* 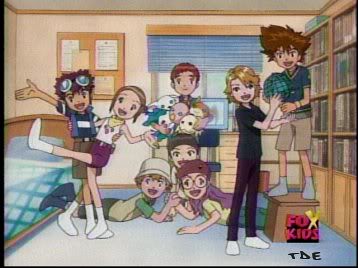